I woke up yesterday morning with a sense of dread which I don’t recall ever experiencing. For about a year and a half we have been battling renal failure with JayJay. He had been doing quite well, sometimes to the point we felt like maybe we were going to defeat this insidious disease. Kidney failure, however, doesn’t work that way. At best, you can hope to delay the inevitable and we did so very successfully for a while. A few weeks ago he began to exhibit signs of a serious decline. Over the last few days he had lost all interest in food and now he wouldn’t even take his water. I knew that his time was very short and this would probably be his last day. As we had thousands of times, we took a long morning walk, except this time I had to carry him as he just didn’t have the strength to go more than a few yards. He was always comfortable in my arms and I know he enjoyed his last trip through the neighborhood. We had over a year with JayJay after the diagnosis, which many owners of dogs with this disease never have. For that I am grateful.

It was 10 years ago last December when Carol and I decided to get a dog. It was a gift from my mother. We each had friends that suggested a Cairn. Frankly, neither one of us had ever heard of that breed, but it was small and didn’t shed a lot. We found a breeder south of Chicago and went in and saw four or five of the plainest looking puppies you could possibly imagine. One little guy actually walked over to us and he was the one that would change our lives forever. I remember Carol saying, “but he’s not cute”. She was right! Little did we know what a handsome animal he would become. This first picture is one of my favorites as he began to morph from that plain brown puppy to the beautiful animal he ultimately became. What a cute little fur ball he was. 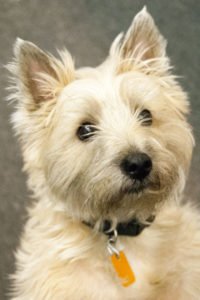 Could anyone resist that face?

I own a computer repair store and JayJay has greeted my customers, literally, since the day we opened. Not even the most hardened and irritated customer could ever resist petting him. Even the most skittish child quickly warmed up to him. It was fun to watch and I can’t imagine any dog giving more people more smiles than this little guy did in a life that was much, much too short.

I can’t tell you how many times I would get a call and people were trying to remember which store they had been to and they all asked me if I was the one with the cute little dog. I always proudly said yes that’s us. I can’t say I was particularly thrilled being known as the old computer guy with the cute dog, but at least they remembered us. It was amazing how many times people walked in, totally frustrated with a computer problem and they would ask about JayJay before we talked computers. Everyone loved him and he always returned their love.

Like all terriers, he was as stubborn as a mule, but to those of us that love the breed it is this independence that makes them so endearing. Others just don’t understand. I remember my youngest son saying he didn’t think JayJay understood anything I said. As I told him, he understands every word he’s ignoring. 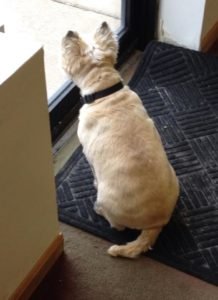 I don’t remember exactly when this next picture was made, but it’s a view I frequently had as JayJay had seen something and he was anxiously anticipating the next visitor. (Look at those ears!) Maybe it was the UPS driver, the mailman, one of his friends in the neighborhood or a customer for the shop. Whoever it was, they were about to receive a greeting that they would never get anywhere else.

To those that are familiar with terriers, I’m sure they are surprised to see JayJay sitting at a door like that. Most dogs would be running out as soon as someone tried to come in. Not JayJay, he knew he had a good gig here and was more than willing to let people come to him. He seemed to have so few of the traits that can make this breed so very difficult to manage at times.

Can you tell that I thought he was very special! He was and I sure do miss him!

He was kind of a celebrity here in the business complex and people got used to seeing me walk him nearly every day. If I would have let him, he would have stopped to visit everyone and I never would have gotten any work done. He loved his treats and knew where to go to get them. I’m not the only one that will miss this little guy. He had a lot of friends.

In some ways this next picture is a little sad, but it is so JayJay. He hated all the things that went along with being sick. I gave him IVs three times a week since the dreaded diagnosis. As soon as we walked in the door to the house after work he would try to make himself as invisible as possible so he wouldn’t have to get the treatment. As smart as he was, he didn’t understand the calendar and on those nights that he wasn’t to get a treatment it took a little while to convince him to come join us. Sometimes he would go out and sit in the yard hoping, I guess, that we would forget. Amazingly, I could call him and telling him it was time for his treatment and he would slowly walk in the house and sit quietly on my lap while I put the needle in and gave him the treatment. After we would finish, I would tell him we were done and he would jump off my lap, walk to the end of the couch and wag his tail as if to say that’s okay, Dad, I understand you have to do that. On some level, I know he did.

I had to give him Aluminum Hydroxide as a phosphorus binder. He also hated that. We went through the same dance nearly every day. I would tell him it was time for his medicine and he would come, but he was not going to make it easy! I would gradually get his mouth open enough to get the syringe in and give him the medicine. Inevitably, not all of it would make it and he would do the cairn shake and get the stuff all over me and the office. I can’t bring myself to clean it all up.

We went to the shop yesterday morning, as we did most every day. As I had done recently, I set him down close to the door and let him walk in. It was a beautiful day here and there was a breeze blowing and, as he frequently did, he put his nose up in the air to smell the world. You could always tell it excited him and even in his very weakened condition he stood there for a few seconds and enjoyed it as he had so often. It was a wonderful memory that he gave me, shortly before we had to take him to the Rainbow Bridge. I just know everyone will love him on the other side of the bridge as much as they did on this side. Whether dogs or people, they all seemed to love JayJay.

I have many stories about JayJay, that will make me smile in the coming years. That’s what he was about. Two small incidents stand out right now. I recall taking him to his vet for his initial checkup and after examining him, Dr. Martens said “this little fella hasn’t got a mean bone in his body“. She’ll never give a more accurate diagnosis! The other incident was a brief remark from one of my customers that I never expected – “he’s got a good soul“. There was just something about JayJay and you could nearly feel it.

God did some of his best work when he created the Cairn. Especially this one!

I don’t look forward to starting next week without him, but in time the hurt will be overtaken by the remembrances of the joy he brought to me and so many others over the years.

7 thoughts on “My best friend is gone”

This site uses Akismet to reduce spam. Learn how your comment data is processed.